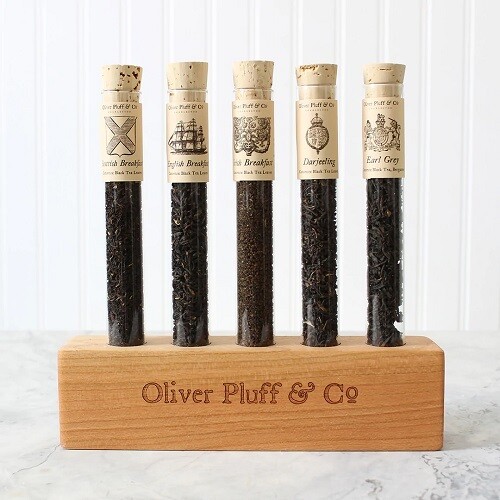 Earl Grey Black Tea blend with a distinctive flavor and aroma derived from the addition of oil extracted from the rind of the bergamot orange, a fragrant citrus fruit. Earl Grey was introduced in England in the early 1800's, having been presented by an envoy on his return from China. The recipe was discovered and went into production by the 1830's, and was named after 2nd Earl Grey - British Prime Minister in the 1830's.

Scottish Breakfast The strongest of black tea blends, Scottish Breakfast offers a hearty cup of warmth in the damp and cold regions of northern Scotland. It is also blended strong to compensate for Scotland's naturally soft water, which diminishes the infusion of tea. With hints of wood and smoke, the blend's mild astringency is balanced by adding cream and sugar.

Darjeeling Darjeeling is a black tea which yields a thin-bodied, light-colored infusion with a floral aroma, which can include a musky spiciness sometimes described as "muscatel". Tea plantations are seated at the foothills of the Himalayas in northern India. The Darjeeling region is renowned for tea with unique flavor and distinctive quality that is unlike any other in the world. Gardens were planted by the British in 1841 by the British East India Company.

Save this product for later
Display prices in: USD